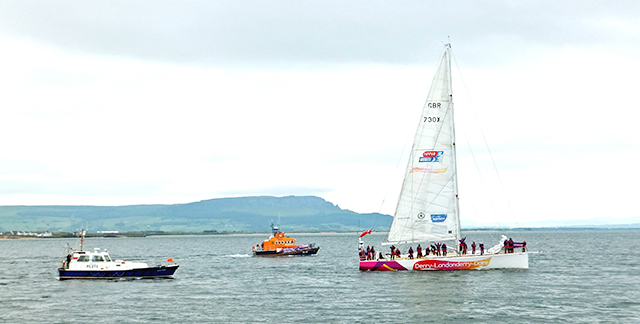 THE DERRY Clipper received a warm welcome in Greencastle this morning after winning the 15-day race across the Atlantic from New York.
The heroic crew were welcomed by a good crowd of supporters and family members in Greencastle village at 7.25am today.
It was emotional for family members who called to their loved one and popped bottles of champagne for the heroic crew.
The Derry Clipper, skippered by Buncrana man Sean McCarter, stormed to victory in the 2,800 mile leg from New York to Derry, which was the 14th stage in the 16 series race.
The yacht and it’s crew will now take part in a week long maritime festival in Derry before the penultimate stage begins in Greencastle on Sunday, where the world-famous Red Arrows will take to the skies.
The Red Arrows will perform their thrilling flying display as the stunning send-off to the Round the World Yacht Race at 2.45pm, with the Clippers leaving the village an hour later.