Former Donegal star Darach O’Connor put on a scintillating display at the Scarvey on Sunday afternoon as Gary Duffy’s men made it five wins from five to book a last four encounter with Cloughaneely.

Fanad Gaels simply had no answer to the pace, power and sheer class of O’Connor who looked every inch the inter-county star that we all know he can be.

After Odhran Doherty and Seamus Coyle had traded scores early on, it was the home side that took complete control.

The impressive Caolan McGonagle won possession around the middle, used that big stride of his to maximum effect and fired high to the roof of the net past the helpless Eoin McGonigle.

Things got even better for the hosts moments later when Wiliam McLaughlin won a poor Fanad kick out, worked the ball into O’Connor and he produced another superb finish to the roof of the Fanad net. 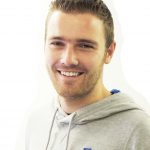 Sports reporter Gerard McLaughlin is a graduate of LyIT and is the most recent addition to the editorial team. The Buncrana man joined the Inishowen Independent in 2013.