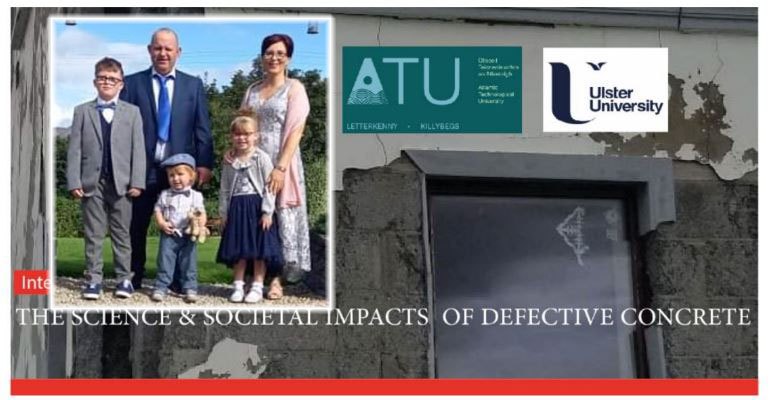 Inset: Eileen Long with her family

Eileen Long, a mother of three living in a mica-defective home on Inch Island slated for demolition, will be among the speakers at next Tuesday’s international conference in Letterkenny examining the science and the social impact of defective concrete.

“My home is bad, but it could be worse,” she says.

“I know some people get up in the morning and have to mop up rain that’s seeped onto their floors overnight.

“People are breathing in mouldy, damp air, some are afraid to turn on their electricity in the worst affected parts of their house.

“It’s a disgrace there’s no emergency accommodation for those people to move into.”

“For now, at least we’re safe to live in our home.

Cracking on her home’s walls appeared in 2016, and subsequent testing under the 90:10 mica scheme confirmed the presence of mica.

The home is approved for demolition and rebuild under the scheme, but Eileen says paying the difference that the scheme requires is beyond the family.

“Where would we get the kind of money we’d need to rebuild?” she asks.

She describes living in the home as a nightmare, and worries that the children, who are aged 3, 7 and 11, are missing out on the happy years of their childhood.

“I have no care for that house, I just want out of it,” she says flatly.

The family can’t use two bedrooms. She is especially saddened that she can’t decorate her daughter’s bedroom.

“Those are the things that make a home and we feel we’re letting our children down.

“Their childhoods are going to pass us by, and we haven’t had the benefit of our house.

“We went ahead and bought a mobile home to be ready for when the house is knocked, but the thought of living in it is awful,” Eileen says.

“I’d be worried that even if we did demolish the house, the government could change tack again and we’d end up stuck in the mobile home for the rest of our days.”

She says the family can’t move ahead because financially they’re at a standstill.

The new scheme is due to open next year, but she will believe it when she sees it.

Eileen will speak at the Letterkenny conference during an afternoon session where contributors will discuss not just the impact on families caught up in the crisis, but also the impact on secondary school students, on business owners and community centres, with Dr Karen Kirby of the Ulster University attempting to measure the scale of the mental health and well-being impact on affected homeowners.

Other speakers during the session include Denise McCool from the Inishowen Development Partnership, Angeline Ruddy, a secondary school teacher at Moville Community College, Ann Owens a long time mica campaigner, and Dr Eileen Doherty will chair the session.