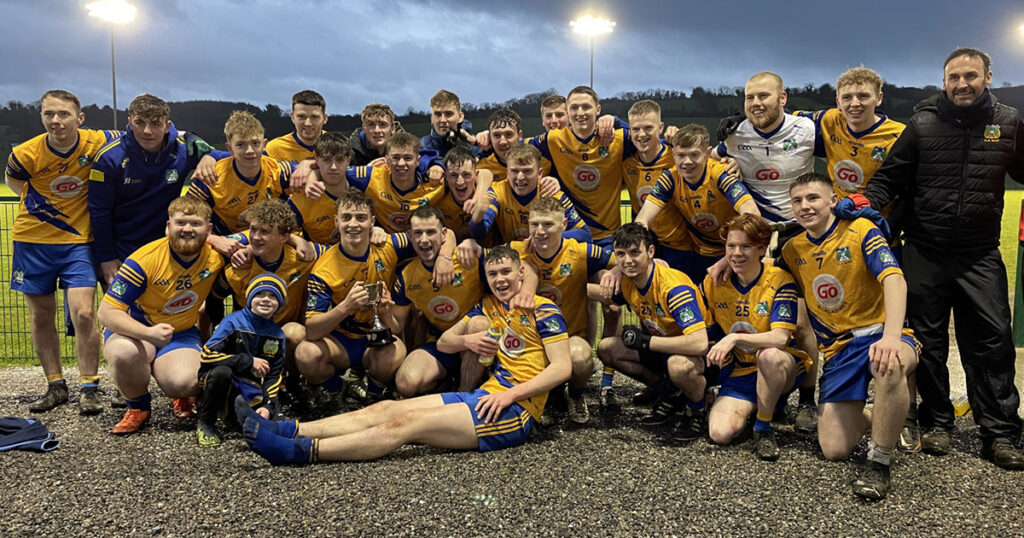 Burt are the Donegal U21C football champions after a five-star performance that blew Red Hugh’s away in Friday’s final.

First half goals from Keith McColgan and Conor O’Donnell had Burt 2-4 to 0-4 ahead at half time, and a second half double from Michael McElroy and one from Conor Gartland left 16 points between the teams at the end.

It was the culmination of a busy Christmas week for the Burt lads. Seven days earlier they won the U21 hurling championship with a victory over Setanta and Friday’s performance showed they’re pretty handy with the big ball too.

A sodden GAA Centre in Convoy hosted Friday’s final, and Burt were quickly off the mark with Conor Gartand firing over an early free, and they hit the first of their five goals moments later when after stealing the kickout, Keith McColgan fired a powerful finish past Thomas McMenamin and into the net.

McColgan followed up with a point from play and Burt were 1-3 to 0-0 ahead and just four minutes gone.

Red Hugh’s steadied their ship, drawing corner forward Tiernan Kelly back to sweep in defence and they closed down some of the open spaces.

Two Jack Gillespie frees got Red Hugh’s off the mark, when his third effort dropped short Cathair Browne fisted over for a point to make it 1-2 to 0-3.

Gartland and McColgan responded with pointed frees for Burt ahead of a frenetic five minutes before the break that Red Hugh’s should really have made more of.

First, Jack Bradley hit the upright from a scoreable position and then lively corner back Bryan Irwin hit a brilliant shot low to the corner. With keeper Shea Bown beaten, Darren Bradley threw himself full length across the goal to make a superb diving save.

It was a let off Burt took full advantage of.

They worked the ball out to Conor O’Donnell who held off two opponents fired a shot goalwards that somehow squirted under the body of the Red Hugh’s keeper and into the net.

Gillespie converted another free for Red Hugh’s who trailed by double scores, 2-4 to 0-5, at the break.

Trailing by six points, Red Hugh’s dispensed with the sweeper for the second half in the hope of presenting more of an attacking threat.

But it backfired as the Burt attack was able to exploit the space that was now open in the attacking third.

And they hit their third goal early in the half when midfielder Gareth McElroy’s dropped left footed effort was spilled by the keeper, his twin brother Michael was on hand to sweep the ball into the net.

Red Hugh’ were fortunate not to concede another goal right away. Shayne Gallagher put Shane McMonagle clean through, but his shot skimmed the crossbar and the lead was out to 3-5 to 0-5.

And Gallagher himself fired narrowly over the bar soon after being picked out at the end of a fine attacking move from the right.

Darragh McMenamin pointed for Red Hugh’s, but the momentum remained with the Inishowen side. Caolan McKinney and two points from Keith McColgan had them 3-9 to 0-7 clear, Gillespie having tagged on another point for the Killygordon side.

And midway through the second half Red Hugh’s got a goal of their own when James Doherty flicked a dropping ball past Bown and into the net, but it turned out to be their final score of the game.

Gareth McElroy surged forward and kicked over off his right, followed swiftly by a long range point from out on the left from Gartland.

There were 56 minutes on the clock when Michael McElroy found the net. He was in an acre of space and inside the 20m line with the ball on the deck. The Red Hugh’s keeper came rushing off the line to narrow the angle, but McElroy showed good awareness and no little skill to stroke the ball right footed to the bottom corner for a sublime finish.

There still was time for another goal. Ciaran Curran hit the upright with a shot and the ball broke to Gartland who held off some close attention before rasping an emphatic finish to the net.

The win wrapped up a very successful season for Burt, with several amongst Friday’s squad adding the U21C championship medal to the U21 hurling, Division 3 All County League and Division 3 Reserve league titles won earlier in the season.