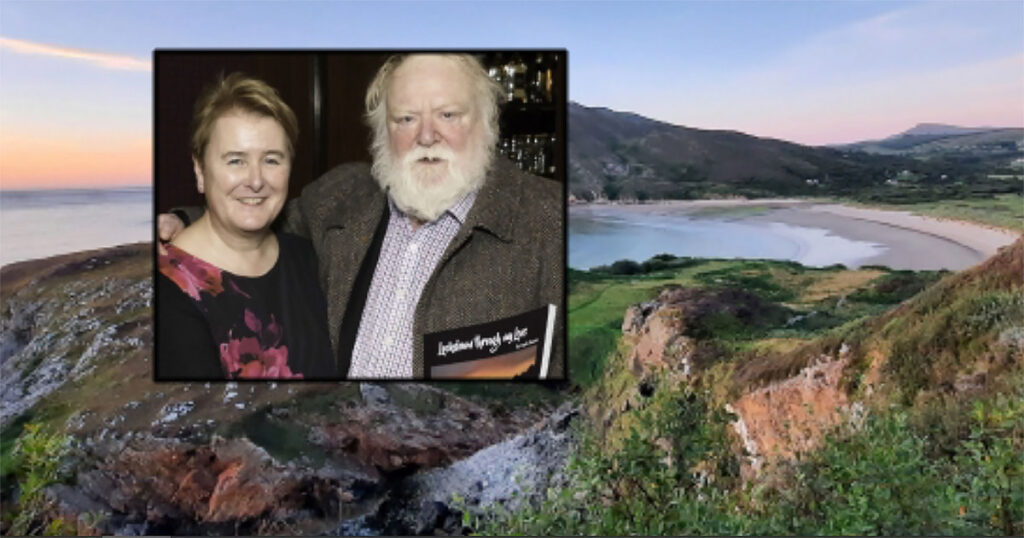 Inset: Angela Tourish with Frank McGuinness at the launch of her book 'Lockdown Through My Lens'

For photographer Angela Tourish the recent lockdown gave her a unique opportunity.

She began taking photographs regularly within the confines allowed by the Covid rules.

“We were limited to 2 kilometres, then 5kms, 20kms and countywide – so all of the photographs were taken within those boundaries at those times,” she says.

Her photographs resonated with the local Inishowen community.

“During lockdown I put up some photographs on social media and the response was unbelievable, especially from older people who were cocooning.”

Such was the demand for Angela’s online ‘window to the local world’, that she was often posting thirty or more photographs every day.

“People were delighted to see the photos. They weren’t allowed out themselves to see the new buds on the trees or newly blossoming flowers.

“Then when lockdown ended, I thought it would be nice to document it all so I decided to put a book together.”

The 168-page book, ‘Lockdown Through My Lens’ is out now and contains many of the remarkable photos she took during the period. It was launched recently by writer Frank McGuinness who wrote the preface and added a poem to the book.

Most of the photos were taken close to home, in and around Buncrana.

As the pandemic requirements were relaxed, Angela was able to snap natural scenes all across Inishowen, from Redcastle to Clonmany; Malin Head to Burt and Inch.

“Some days I had a theme, either animals, flowers, colours or just winding roads and derelict houses.”

Her book was recently launched in Buncrana by writer Frank McGuinness whom she photographed when he got his Freedom of Buncrana award from the Town Council twelve years ago.

“I see his brother Shane regularly and asked him first if he thought Frank would agree.

“Shane thought he would, so he asked him, and the answer was a lovely ‘yes’, plus he also agreed to do a preface for the book and a poem. I was overwhelmed by his beautiful words about my photographs,” she said.

Angela has had a life-long interest in photography.

“My dad gave me a Diaxette camera when I was fifteen or so and that’s when I started dabbling and trying to teach myself how to take photographs.

“I then progressed to a Zenith and on to a Canon Rebel G and I currently use a Canon EOS 7D, which I like.”

The Buncrana mother-of-two has recently become a grandmother, but she’s not holding out much hope for the next generation of Tourishs on the photography front.

“My two children, Kevin and Orla, who are now adults have no interest in photography whatsoever – although my baby grandson Páuric [almost four months old] gets photographed every time he moves!”

Angela’s book ‘Lockdown Through My Lens’ is available from many local stockists, including Mac’s Bookshop; Duffy’s Chemist; Supervalu; McKenna’s Centra; Phyllis’ Wool Shop; and Buncrana Post Office, and is priced €25.