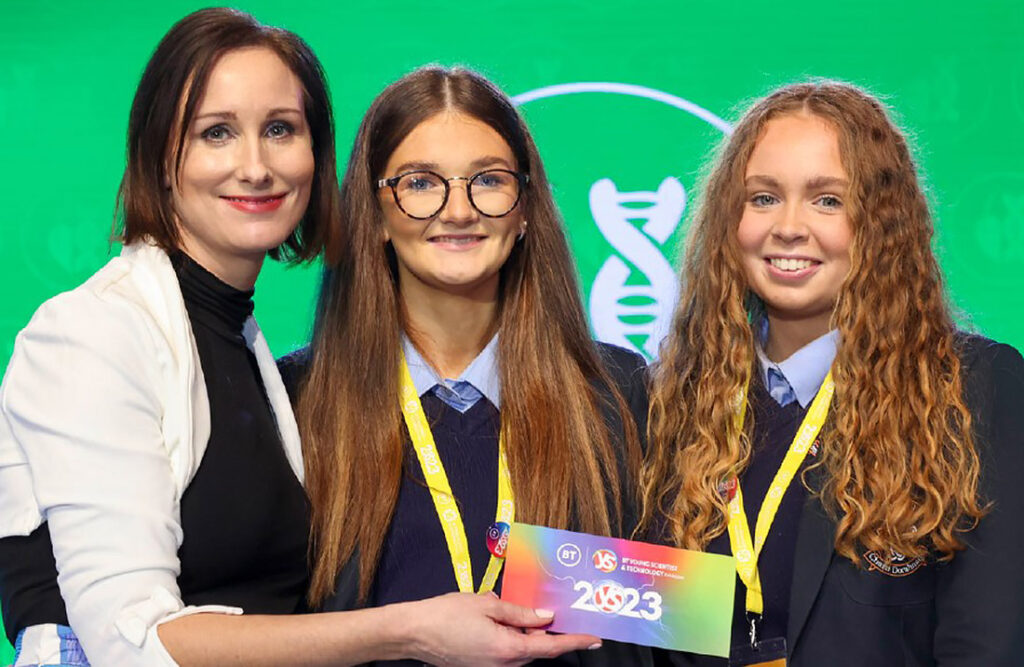 Beth Doherty and Ciara Gilmore from Carndonagh Community School (CCS) won the second-place award in the ‘Biological and Ecological’ category at this year’s prestigious BT Young Scientist & Technology Exhibition in the RDS in Dublin on Friday.

Beth and Ciara are also the only Senior Group winners from County Donegal in 2023.

Beth is from the Malin Road in Carndonagh and Ciara is from Rashenny.

“They were sitting relaxing [in the RDS], not really expecting anything at all, but then their names were called out – and they couldn’t believe it,” said Christine Gilmore, Ciara’s mum and a teacher at CCS.

Christine said everyone at CCS is delighted for Beth and Ciara.

“Ourselves and Loreto were the only two schools in the county to have won category group awards,” she said.

Mum Christine is doubly proud of daughter Ciara, given that she won an individual Junior award four years ago.

The sixth-year girls won the award for their exhaustive study which took around four months to complete.

It found evidence indicating that a reactivation of the Epstein Barr virus, which causes glandular fever, is up to three times more likely in those who have had long covid.

“They worked so hard on this and they deserve it. They were working all over the Christmas holidays,” said Christine.

“They have been working on the project since the middle of September, when Ciara had just been diagnosed with glandular fever for the second time. That gave them the idea for the project.”

“They sent out surveys to schools across the country. Then they had to filter through all that data and analyse all the results to confirm their hypothesis.”

Beth and Ciara also won a ‘Display Award’ for 2023, rounding off an unforgettable weekend in Dublin.