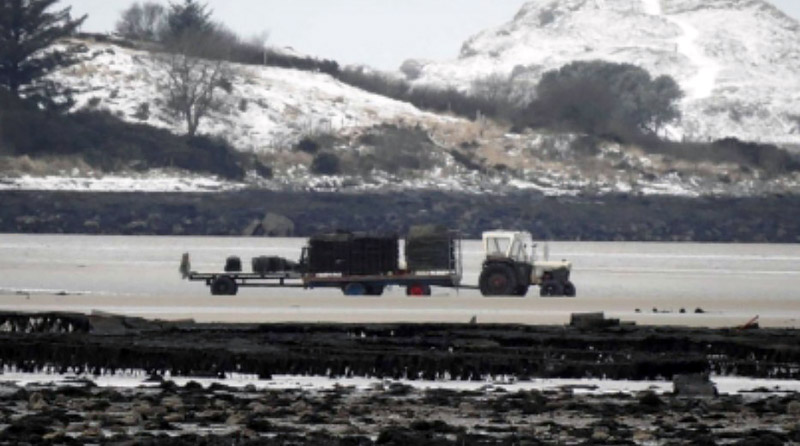 The Department of Agriculture and the Marine has refused to license 14 new oyster farms on Trawbreaga Bay at Malin.

Citing environmental concerns and the large decline in the population of Light-bellied Brent Geese, the Department refused applications from six businesses and one individual who had sought to develop an area of around 13 soccer pitches (25 acres) of the bay for farmed shellfish production.

Oysters are currently cultivated on a substantial area of Trawbreaga Bay, which is a Special Protection Area (SPA) since 2012.

Mesh bags are attached to metal trestles that are sunk into the sand and mud on the seabed.

Several of the companies who were refused operate existing oyster farms in the bay, which lies between Malin and the Isle of Doagh.

Their existing licences remain in place.

In 2021, the Marine Institute recorded 99 plots on 150 acres cultivating gigas or Pacific oysters in the bay.

Oyster farming has been operational on Trawbreaga Bay since the late 1990s; however, aquaculture licences weren’t issued until the early 2000s.

In each of the 14 decisions, made in the name of Minister for Agriculture, Food and the Marine Charlie McConalogue, the Department cited the decline/displacement of the Light-bellied Brent Goose population on Trawbreaga Bay as a reason for refusing permission.

Research by the Marine Institute in 2019 and 2021 revealed a large decline in the bird’s population.

The Light-bellied Brent Goose is amber listed on the Birds of Conservation Concern in Ireland.

The Department says further monitoring is needed to assess what impact of expansion of aquaculture on the bay would have on the species.

The decision also cited the requirement to monitor the impact of aquaculture on the ecology of the mud, sand and coarse sediments along the foreshore.

In addition to those general environmental concerns common to all, the Department also cited other issues specific to the area of the bay for which individual licence applications had been made.

Northern Oysters Ltd, Carndonagh, was told its site was unsuitable in parts as the ground was too soft and too uneven for trestles, and its location could impede a river channel that ‘has some value for migratory salmonids’.

Oceanic Organic Oysters Ltd, Greencastle, made five applications, four of which were refused for not being in keeping with the ‘orderly development’ of aquaculture in Trawbreaga Bay. One site was refused as it would lead to significant constriction of public access and shellfish farm access to an
area of the foreshore.

Two applications made by Atlantic Crab Ltd, Clonmany, were refused as the
Department warned the placing of trestles could impede access to the lower foreshore by the public.

Foylantic Ltd, Greencastle, had two applications refused, with the Department warning that they could impede public access to the shoreline, including boat access from the shore and pose a hazard to small boat navigation in the low water
channel, and have a “substantial negative visual impact”.

An application from Barr Oysters Ltd, Greencastle, was refused as it could impede
public access and cause significant visual impact.

Development on the site was also likely to lead to loss of protective gravel cover.

An application in the name of James Ball, Malin Head, was rejected on Trawbreaga Bay refused as the site overlaps an existing access route for others in the bay.

Applicants can appeal the Department’s decision to an independent appeals board.

The Department had previously refused applications on Trawbreaga Bay. In 2019, it refused nine of 22 applications for oyster farming.

The Department advertised its decision to refuse licences in the Donegal Democrat, the DonegalTown-based newspaper that is not widely circulated or read in Inishowen.