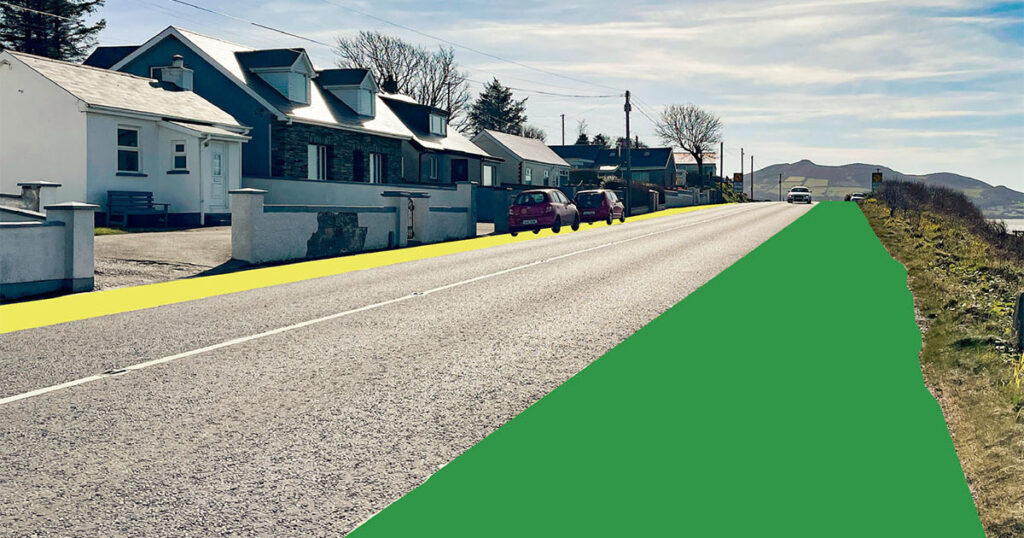 Location of the greenway on the road between Bridgend and Buncrana

The Buncrana-Bridgend greenway, the centrepiece of the North West Greenway Network announced five years ago, has been mothballed.

The €10 million in EU funding allocated to it has been lost.

The cycle and walking route – which was due to be constructed before the end of next year – has been in planning since 2017 with a route designed and selected in 2021.

A compulsory purchase order (CPO) to acquire the land had been discussed and was reported to be ready 12 months ago, but Donegal County Council did not proceed with it.

And with a deadline on either spending or losing the EU grant looming, the local authority has allocated the €10 million to build greenways in Castlefin and Quigley’s Point instead.

It throws the entire Buncrana-Bridgend greenway into doubt.

The council says it will be funded by Transport Infrastructure Ireland, but it will be 2028 before it’s completed – subject to planning permission being obtained.

Other parts of the North West Greenway Network, including 3km in Muff and a cross-border route between Lifford and Strabane have already been completed.

Sections in Derry will begin next month and be complete ahead of the December 2023 deadline by which time the EU funding had to be drawn down.

The Muff greenway, which will eventually join up with a route through Culmore and continue to the quays in Derry city centre, opened earlier this summer.

It has been hailed as one of the best developments ever to come to the village.

The North West Greenway, which obtained €18 million in funding including €15 million from the EU’s Interreg VA programme, was described as having the potential to draw up to 200,000 visitors to the region annually.

It is listed in Fáilte Ireland’s tourism blueprint for Inishowen as a key tourism attraction on a par with Malin Head and Fort Dunree.

Cllr Jack Murray expressed disappointment at the delay, and said obstacles to its development need to be overcome.

“It’s a critical piece of infrastructure that will massively enhance the tourism offering in Inishowen,” Cllr Murray said.

“We’ve seen what’s happened with huge visitor numbers in Mayo and Waterford [where greenways have been in place for some years].

“It must go ahead, but in a way that is accepted by the communities through which it passes,” he said.

“And quite clearly, there are obstacles there that must be overcome.

“But with the right will and determination, we can find a solution to get the greenway to go ahead in a way that’s welcomed by the people nearby.”

Earlier this year, the Inishowen Independent reported on criticisms of the proposed route through Fahan, Lisfannon and Buncrana.

Some affected property owners and local residents highlighted concerns which they claimed would render a farmyard in Fahan unworkable, cause difficulties for the North West Golf Club, remove parking space from a busy bar and restaurant in Buncrana, and cause gridlock on the R238 route from Fahan to Buncrana.

Earlier this month, Donegal County Council announced the extension of the North West Greenway Network from Muff to Quigley’s Point, and from Lifford to Castlefin.

It was silent on the position of the Buncrana-Bridgend-Newtowncunningham element of the network which prompted the Inishowen Independent to seek an update.

In its response, the council acknowledged the Interreg (EU) funding for the 28.7km greenway from Bridgend to Buncrana, including a spur to Newtown, was gone.

However, it insisted the project has continued to be progressed as projected, funded in full by Transport Infrastructure Ireland (TII).

TII did not respond to questions about the project’s funding status.

While discussions with landowners have been ongoing for several years, the council said it is currently putting in place a team of independent experts to engage with affected landowners regarding the purchase of their lands in advance of seeking planning consent.

The council also said it was updating the route’s design to include recent changes to guidelines on cycle paths.

An Environmental Impact Assessment Report (EIAR) is necessary as part of the planning process.

In March 2021, the council said the EIAR would be ready by the end of that year.

However, the council has told the Inishowen Independent that the EIAR will not now be published until “late 2023 or early 2024”.

The council statement concluded by saying that, subject to planning consent, it anticipates construction on the Buncrana-Bridgend greenway will begin in 2025 and the route will be fully operational in 2028.